Barodontalgia, which is commonly referred to as tooth squeeze, is a pain in the teeth that is caused by a change in ambient pressure. The pain is usually gone once the subject returns to ground level. Dental barotrauma is a condition where changes in barometric pressure can cause damage to the dentition.

The most common victims of barodontalgia are underwater divers. In the event of completing a deep dive, the pressure can increase by several atmospheres. Military pilots also experience barodontalgia frequently as a result of the rapid changes in pressure. Barodontalgia can sometimes be so severe for pilots that it require them to end the flight.

Barodontalgia is a symptom of a greater dental disease. One example is an inflammatory cyst in the mandible. Most of the common oral pathologies have been reported as potential sources of barodontalgia. This includes: dental caries, defective tooth restoration, pulpitis, pulp necrosis, apical periodontitis, periodontal pockets, impacted teeth, and mucous retention cysts. One exception is barodontalgia which exists as a result of pain from barosinusitis or barotitis-media. These two conditions are caused by pressure changes rather than a pressure-related flare-up of a pre-existing condition. A review of studies completed between 2001 and 2010 exposed a rate of 5 episodes per 1,000 flight-years. Maxillary and mandibular dentitions were equally affected in flight. However, in diving, maxillary dentition was affected more than the mandibular dentition. This can indicate a greater role for the maxillary sinus pathology in diving barodontalgia. Despite efforts to control and stabilize cabin pressure, the current rate of in-flight barodontalgia is similar to what it was in the beginning of the 20th century. In addition, despite the greater fluctuation in pressures for divers, the weighted incidence of barodontalgia among aircrews is similar to the weighted incidence reported among divers. Lastly, alternate to popular belief, and in contrast to the diving conditions, the role of facial barotrauma related to in-flight barodontalgia is minor and found in only about one-tenth of cases.

The pressure changes can sometimes even damage the teeth, rather than just causing temporary pain. When the external pressure rises or falls and the trapped air cannot expand or contract in order to balance the external pressure, the pressure difference can cause issues. The stresses from the sudden pressure changes can be enough to fracture the tooth or dislodge a filling. This is often seen in underwater divers or aviators who experience frequent changes in pressure during their activities. Identifying the pain from a pressure change can be a diagnostic indicator for the clinician. Treatment to prevent future pain focuses on removing the void space, repeating the endodontic treatment or in some cases, removing the tooth entirely. 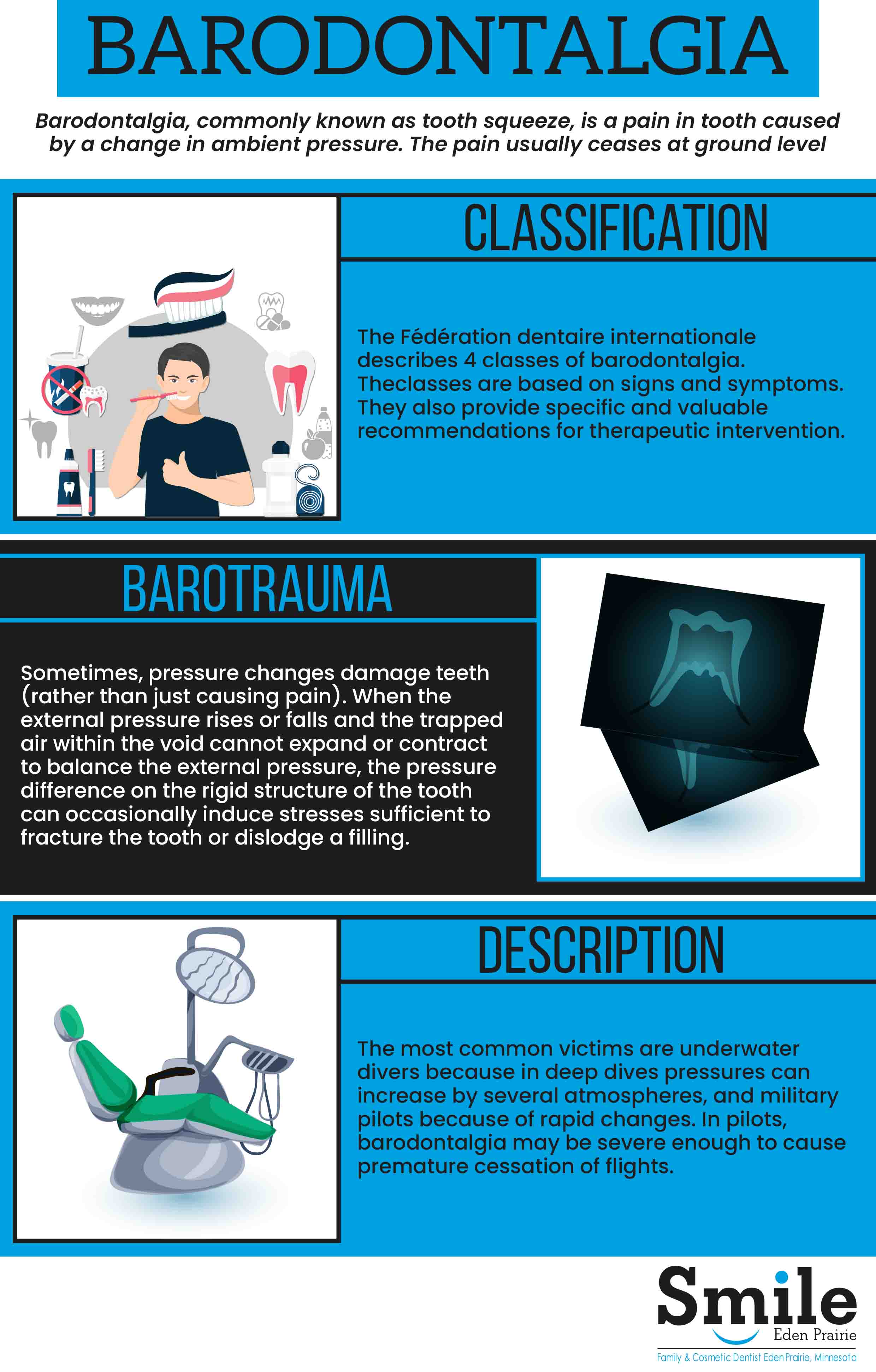