Procaine is a local anesthetic drug and is commonly used in dentistry. It is commonly referred by its trade name Novocain. In some regions, procaine is even referred to generically as novocaine. It mainly acts as a sodium channel blocker. In modern medicine, it is commonly used therapeutically in some countries due to its sympatholytic, anti-inflammatory, perfusion-enhancing and mood-enhancing effects.

Procaine was first synthesized in 1905. It was created by the chemist Alfred Einhorn. Einhorn gave the chemical its trade name, Novocaine. Novocaine is from the Latin word nov which means "new" and caine, which is a common ending for alkaloids that are used as anesthetics. The surgeon Heinrich Braun was the first to introduce it for medical use. Prior to the discovery of amylocaine and procaine, cocaine was commonly used as a local anesthetic. Einhorn desired for novocaine to be used for amputations, however, surgeons preferred general anesthesia. Dentists found novocaine to be very useful.

The primary use of procaine is as an anesthetic.

Procaine is not used as frequently in modern medicine. There are more effective and hypoallergenic alternatives available which include lidocaine or Xylocaine. Similar to other local anesthetics, such as mepivacaine, and prilocaine, procaine is a vasodilator. As a result, it is often co-administered with epinephrine for the purpose of vasoconstriction. Vasoconstriction helps to reduce the amount of bleeding, increases the longevity and quality of anesthesia, prevents the drug from reaching systemic circulation in large amounts and generally reduces the amount of anesthetic needed. Unlike cocaine, a vasoconstrictor, procaine does not contain the euphoric and addictive qualities that can put patients at risk for abusing the drug.

Procaine is occasionally added into illicit street drugs like cocaine. MDMA or ecstasy manufacturers also add procaine at ratios ranging from 1:1 up to 10% MDMA with 90% procaine. This ratio can be life-threatening.

The application of procaine can lead to the depression of neuronal activity. The depression can cause the nervous system to become hypersensitive. This results in restlessness and shaking, and can lead to minor to severe convulsions. Studies on animals found that the use of procaine resulted in increased levels of dopamine and serotonin in the brain. Other issues may occur depending on the individual’s tolerance to procaine dosage. Nervousness and dizziness can result from the excitation of the central nervous system. This can lead to respiratory failure if the individual is overdosed. Procaine may also induce weakening of the myocardium which can lead to cardiac arrest.

Procaine can also cause allergic reactions which may cause an individual to have problems with breathing, experience rashes and have swelling. The allergic reactions to procaine are usually not in response to the procaine itself, but to its metabolite PABA. Allergic reactions are fortunately quite rare. It is estimated to occur in 1 per 500,000 injections. About one in every 3,000 North Americans is homozygous for the most common atypical form of the enzyme pseudocholinesterase. As a result, they do not hydrolyze ester anesthetics such as procaine. This results in increased toxicity and a prolonged period of high levels of the anesthetic in the blood. 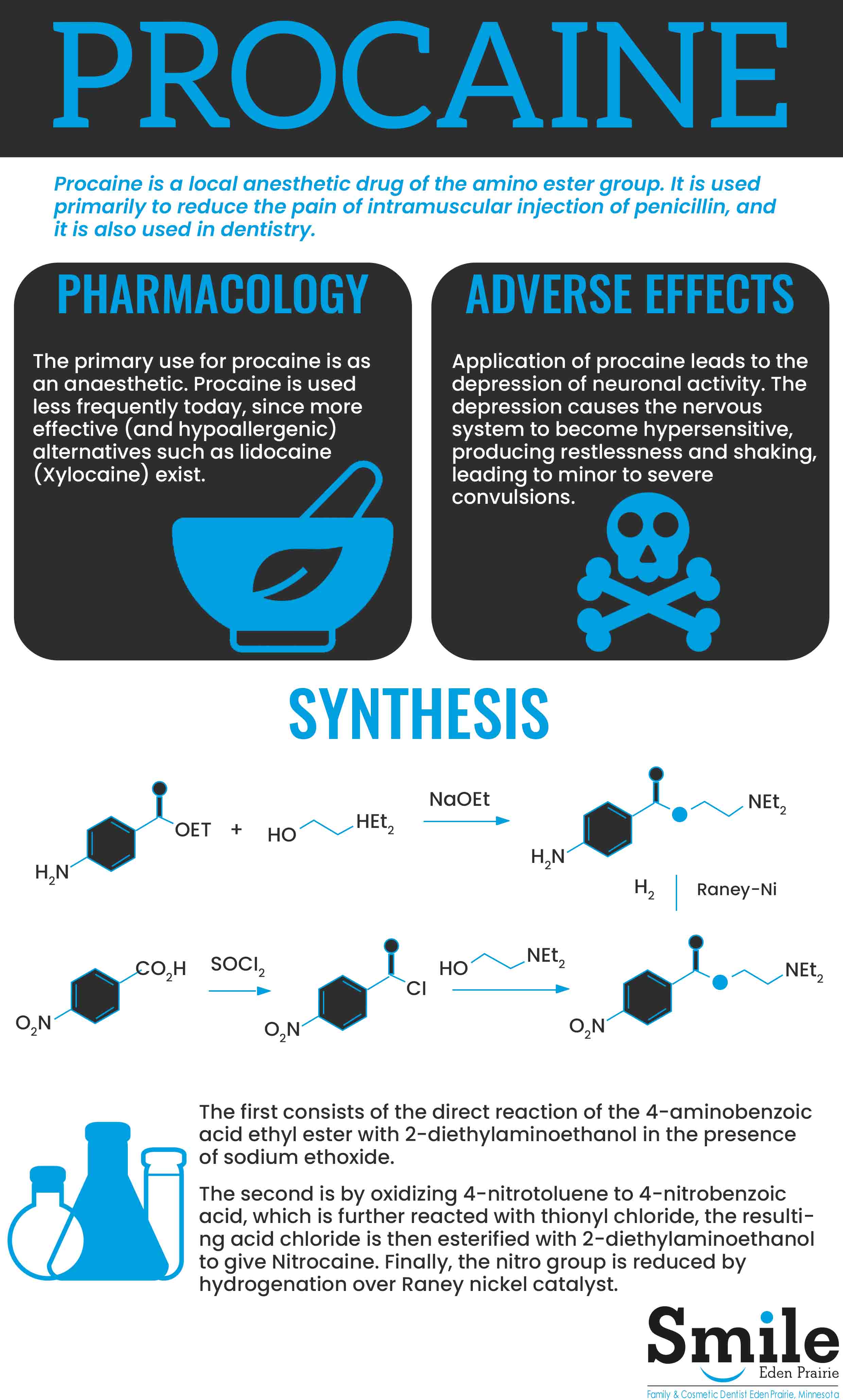